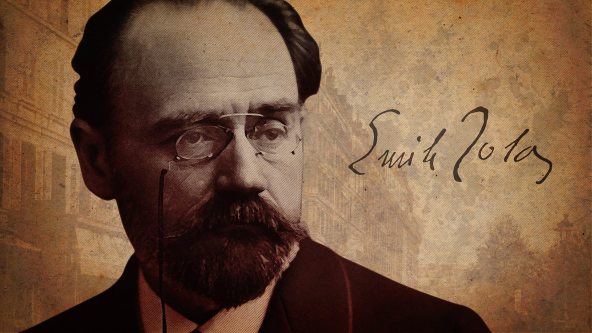 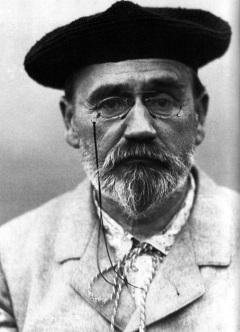 keeping it real
Émile (Édouard Charles Antoine) Zola is amongst the most famous French writers of all time. He led an active political life and was a very important contributor to the Naturalist movement — a literary movement that rejects Romanticism and embraces scientific objectivism and includes social commentary.

Thérèse Raquin (1867) was one of Zola’s first novels and it received a lot of negative criticism when first released. Moreover, it caused something of a scandal and lent the then young Zola a notoriety that followed him throughout his life.

Sex, imprisonment and animalistic tendencies are just a few of the main themes of this novel. 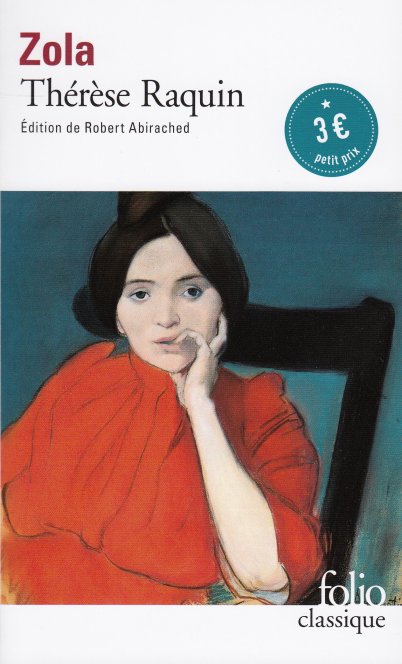 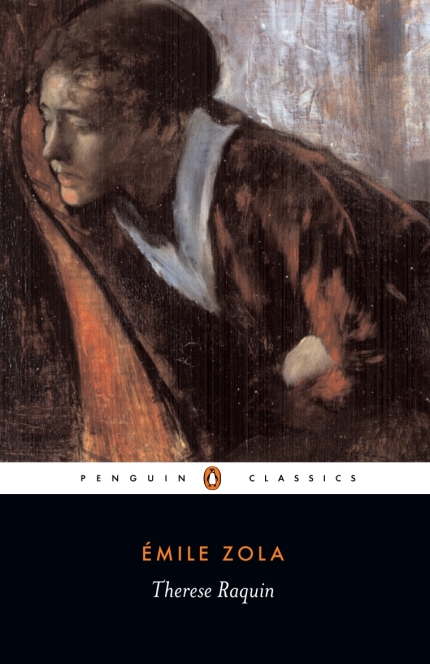 Thérèse Raquin
The book is not only an uninhibited portrayal of adultery, madness and ghostly revenge, but also a devastating exploration of the darkest aspects of human existence.

It is a dark and gripping story of lust, violence and guilt, set in the gloomy back streets of Paris.

It is the story of Thérèse, a 21-year-old woman who is unhappily married to her cousin. In the claustrophobic atmosphere of a dingy haberdasher’s shop on the Passage du Pont-Neuf in Paris, Thérèse Raquin is trapped in a loveless marriage to her sickly cousin, Camille. The numbing tedium of her life is suddenly shattered when she embarks on a turbulent affair with her husband’s earthy friend Laurent, but their animal passion for each other soon compels the lovers to commit a crime that will haunt them forever. 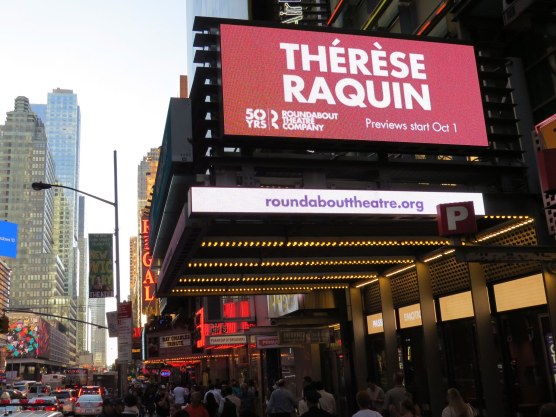 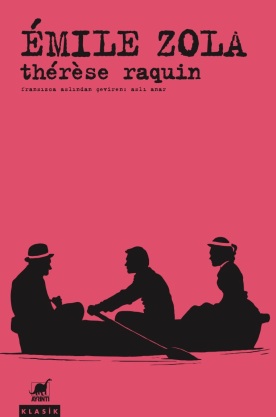 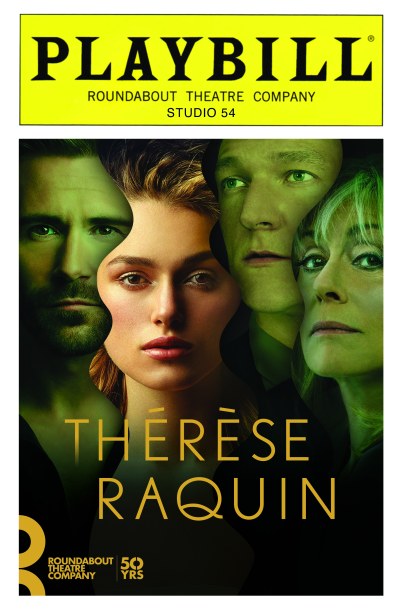 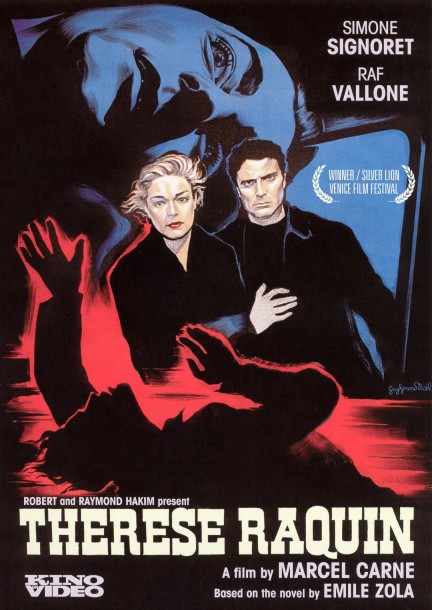 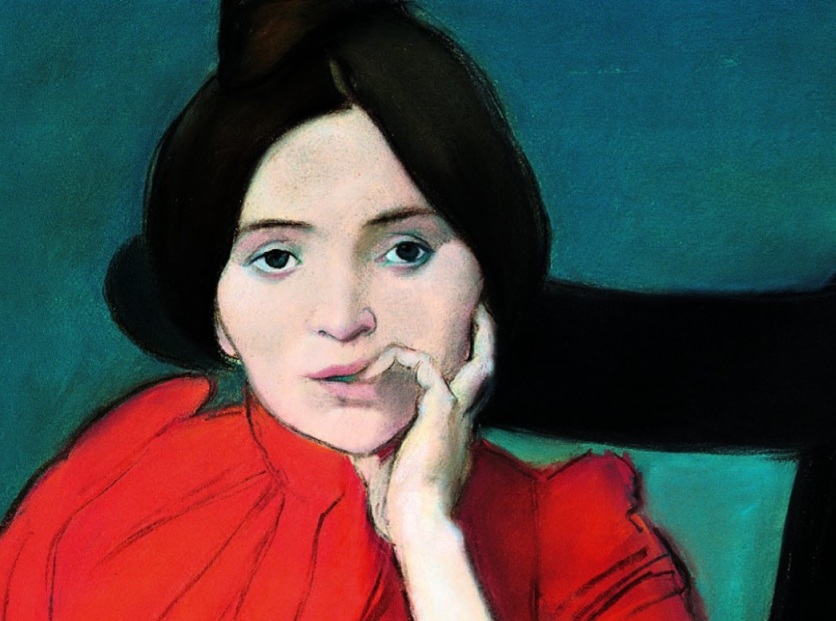 Zola believed that the novel should dive below the surface of everyday life, revealing the dirt, gossip, waste, greed, hostility, and bitterness that other writers refused to acknowledge. Inspired by the discussions of human evolution and natural selection raging around the western world at the time, Zola wanted to use literature to expose and acknowledge the animal in all of us, the most basic instincts that still drive us no matter how “civilized” we attempt to be. 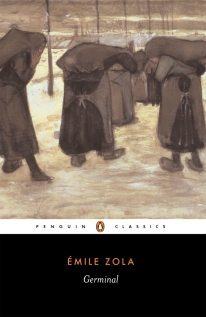 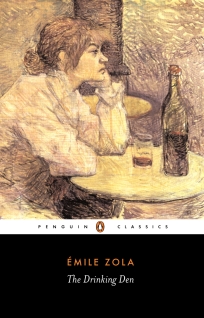 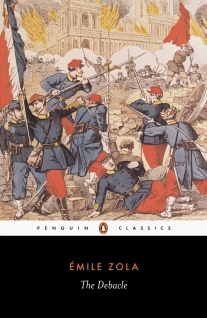 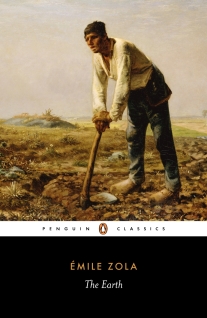 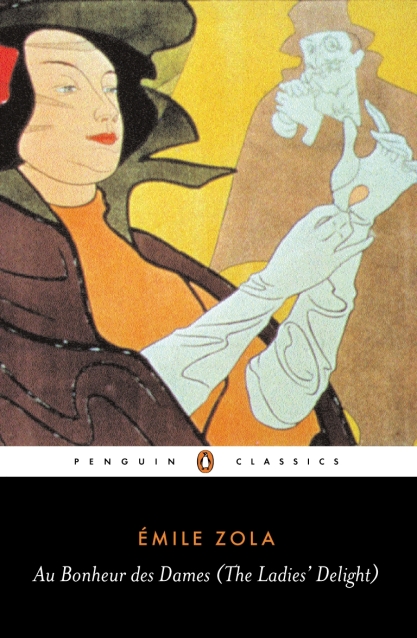 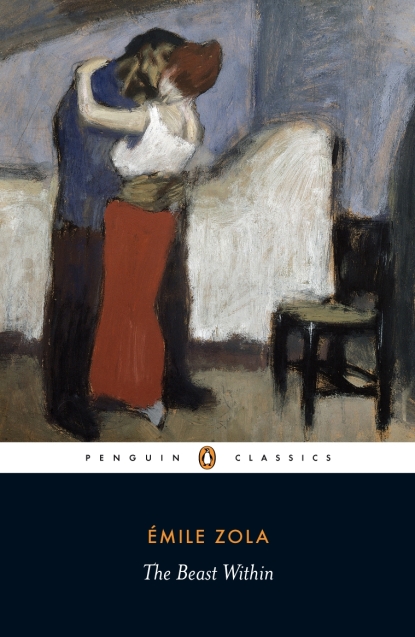 With full thanks and credit to Rachel Cordasco (who has a Ph.D in literary studies) who compiled a chronological list of the 20 Les Rougon Macquart books (this collection’s bi-line is: the Natural and Social History of a Family under the Second Empire). This collection is seen as Zola’s magnum opus.* The series follows the offspring of two families over a period of twenty years (1851-1870) and, enabled Zola to explore the lives of such people in French society as coal miners, department store managers, painters, politicians, priests, slum-dwellers, and prostitutes.

01 — La fortune des Rougon
This book, published in 1871, introduces the reader to many of the characters in the series and sets them against the backdrop of political upheaval following the coup d’état** of Louis-Napoleon in December 1851.

02 — La curée
The Kill (1872) is a scathing portrait of the middle-class that brings into relief its lust for money and pleasure in an age of decadence.

03 — Le ventre de Paris
The novel, The Belly of Paris (1873), features Les Halles, a vast, roofed meat and produce market, and a man whose struggle against the coup d’état* acts as a constant rebuke to the reforms of the Second Empire.

04 — La conquête de Plassans
The Conquest of Plassans (1874) is the story of a politically-minded priest, a woman’s psychological collapse, and apparently one heck of a shocking ending.

05 — La faute de l’Abbé Mouret
Father Mouret’s Transgression (1875) is a surrealistic novel set near Plassans that focuses on a priest who, worn down by illness and intense devotion, falls under the care of an Eve-like figure.

“Sin ought to be something exquisite, my dear boy.”

06 — Son Excellence Eugéne Rougon
In which the eponymous character, once a powerful government minister, plans his return to power with the help of an Italian adventuress. Penned in 1876.

07 — L’assomoir
The Dram Shop (1877) is a sombre novel about a working-class laundress who, despite wanting to improve her circumstances, ultimately destroys herself with the help of her husband, her ex-husband, and large quantities of alcohol. Gervaise Macquart, a woman with two sons who is abandoned by her lover and is forced to fend for herself and protect her family against her newfound lover’s alcoholism. This book explores the problems of alcoholism and poverty in 19th century Paris, especially in the working-class areas of the city.

08 — Une page d’amour
A Love Story (1878) follows a lonely woman dealing with her daughter’s neurological problems, a doctor who tries to help, and the love that blossoms between them but, as this is Naturalism…

09 — Nana
Having escaped a life of brutality and neglect, Nana becomes a popular Parisian courtesan, bleeding dry her many rich conquests and basically taking Paris by storm, that is, until she destroys herself through excess. Zola wrote this one in 1880.

10 — Pot-Bouille
A massive tragi-farce, Pot-luck (1882) details the rise of Octave Mouret to become the head of “Au bonheur des dames,” making it the largest department store in Paris and enriching himself through affairs and some wheeling-and-dealing.

11 — Au bonheur des dames
The Ladies’ Delight (1883) is the glittering Paris department store run by Octave Mouret. He has used charm and drive to become director of this mighty emporium, unscrupulously exploiting his young female staff and seducing his lady customers with luxurious displays of shimmering silks, satins, velvets and lace. Then Denise Baudu, a naïve provincial girl, becomes an assistant at the store – and Mouret discovers that he in turn can also be enchanted. A detailed, complex exploration of the rise of the modern department store and how it sucked the life out of smaller retail shops, set against an improbable love story.

12 — La joie de vivre
The Joys of Living (1884) is bleak story of an orphaned girl whose guardians spend her inheritance and blame her for their problems.

13 — Germinal
Germinal (1885) is a powerful story about coal miners who strike in order to change the terrible conditions under which they must work. Germinal is the 13th novel in Zola’s collection of Les Rougon-Macquart, a set of books that he grouped together, creating blood ties between some of the characters in order to try to give a complete panorama of life under Napoleon the Second. Germinal is the harsh, realistic account of coalminers’ lives in the north of France and their hopes for a better life. At the centre of the novel is Etienne Lantier, a handsome 21 year-old mechanic, intelligent but with little education and a dangerous predisposition to murderous, alcoholic rage. Germinal tells the parallel story of Etienne’s refusal to accept what he appears destined to become, and of the miners’ difficult decision to strike in order to fight for a better standard of life.

14 — L’oeuvre
The Masterpiece (1886) is based partly on the experiences of Cezanne, L’oeuvre chronicles the life of a brilliant but emotionally-overwrought painter who helps usher in a new era of art but ultimately cannot complete his work or settle down into a stable family life. Often translated into English as The Masterpiece, L’Oeuvre is the 14th novel of the Rougon-Macquart collection. It is a fictionalization of Zola and Cezanne’s friendship and it aims to represent the world of artists in 19th century Paris, exploring the rise of movements such as Naturalism, Realism and Impressionism in the art world.

“I would rather die of passion than of boredom.”

The Earth offers a compelling exploration of the destructive nature of human ignorance and greed.

When Jean Macquart arrives in the peasant community of Beauce, where farmers have worked the same land for generations, he quickly finds himself involved in the corrupt affairs of the local Fouan family. Aging and Lear-like, Old Man Fouan has decided to divide his land between his three children: his penny-pinching daughter Fanny, his eldest son – a far from holy figure known as ‘Jesus Christ’ – and the lecherous Buteau, Macquart’s friend. But in a community where land is everything, sibling rivalry quickly turns to brutal hatred, as Buteau declares himself unsatisfied with his lot.

16 — Le rêve
The Dream (1888) focuses on an orphaned girl (again) who falls in love with a nobleman, and all the strongly-held religious beliefs and traditions that conspire–through the nobleman’s father–to keep them apart.

17 — La bête humaine
The Human Beast (1890) is violent story of sex and murder, this particular novel delves deep into the psyche of a young man abandoned by his mother in the countryside and his ultimate rage against women and loss of control.

18 — L’argent
Money (1891) is a satire of the Crédit Mobilier scandal of the 1870s, L’argent portrays the financial machinations of a man who is blind to everything but the acquisition of wealth.

19 — Le débâcle
The Debacle (1892) is a scathing but objective look at France’s defeat in the Franco-Prussian War through the story of two soldiers who bond in the field and then during the bloody days of the Paris Commune. This is a thriller novel in which Zola explores the themes of sexuality and psychosis. The main character, who is the brother of Germinal’s protagonist, has a hereditary madness. Jack the Ripper was an important source of inspiration for Zola for this character, whose psychosis consists in him only being sexually aroused when he kills women, and he thus goes on a terrifying rampage while travelling on a train …

A haunting, impressionistic study of a man’s slow corruption by jealousy.

Roubaud is consumed by a jealous rage when he discovers a sordid secret about his young wife’s past. The only way he can rest is by forcing her to help him murder the man involved, but there is a witness – Jacques Lantier, a fellow railway employee. Jacques, meanwhile, must contend with his own terrible impulses, for every time he sees a woman he feels the overwhelming desire to kill. In the company of Roubaud’s wife, Severine, he finds peace briefly, yet his feelings for her soon bring disastrous consequences. A key work in the Rougon-Macquart cycle, The Beast Within is one of Zola’s most dark and violent works – a tense thriller of political corruption and a graphic exploration of the criminal mind.

20 — Le docteur Pascal
Doctor Pascal (1893) is the novel that brings the entire cycle home, in which Zola depicts himself as “Doctor Pascal,” a member of the Rougon-Macquart family whose genealogical research has shown him the patchwork of greed, violence, and cruelty of his forebears, even as it ends on a note of hope for future generations.

* Magnum opus
noun
— A work of art, music, or literature that is regarded as the most important or best work that an artist, composer, or writer has produced.

** Coup d’état
noun
— Another term for ‘coup’: (1) A sudden, violent, and illegal seizure of power from a government. (2) An instance of successfully achieving something difficult.