Guns, Germs, and Steel is the widely read and well received book by Jared Diamond (a professor of geography and physiology at the University of California, Los Angeles). In 1998 the book won the Pulitzer Prize for general non-fiction. In summary, this book provides an explanation for why Eurasian civilizations have survived and conquered others, while critically, arguing against the idea that Eurasian hegemony is due to any form of Eurasian intellectual, moral, or inherent genetic superiority.

In supporting his thesis, Diamond argues that the gaps in power and technology between human societies originate primarily in environmental differences, which are amplified by various positive feedback loops. When cultural or genetic differences have favored Eurasians (e.g., written language or the development among Eurasians of resistance to endemic diseases) these advantages occurred because of the influence of geography on societies and cultures (e.g., by facilitating commerce and trade between different cultures) and were not inherent in the Eurasian genomes.

This is how the book begins:

The question motivating the book is: Why did history unfold differently on different continents? In case this question immediately makes you shudder at the thought that you are about to read a racist treatise, you aren’t: as you will see, the answers to the question don’t involve human racial differences at all. The book’s emphasis is on the search for ultimate explanations, and on pushing back the chain of historical causation as far as possible.

Most books that set out to recount world history concentrate on histories of literate Eurasian and North African societies. Native societies of other parts of the world—sub-Saharan Africa, the Americas, Island Southeast Asia, Australia, New Guinea, the Pacific Islands—receive only brief treatment, mainly as concerns what happened to them very late in their history, after they were discovered and subjugated by western Europeans. Even within Eurasia, much more space gets devoted to the history of western Eurasia than of China, India, Japan, tropical Southeast Asia, and other eastern Eurasian societies. History before the emergence of writing around 3,000 BCE also receives brief treatment, although it constitutes 99.9% of the five-million-year history of the human species.

First, increasing numbers of people today are, quite understandably, interested in other societies besides those of western Eurasia. After all, those “other” societies encompass most of the world’s population and the vast majority of the world’s ethnic, cultural, and linguistic groups. Some of them already are, and others are becoming, among the world’s most powerful economies and political forces.

Second, even for people specifically interested in the shaping of the modern world, a history limited to developments since the emergence of writing cannot provide deep understanding. It is not the case that societies on the different continents were comparable to each other until 3,000 B.C., whereupon western Eurasian societies suddenly developed writing and began for the first time to pull ahead in other respects as well. Instead, already by 3,000 B.C., there were Eurasian and North African societies not only with incipient writing but also with centralized state governments, cities, widespread use of metal tools and weapons, use of domesticated animals for transport and traction and mechanical power, and reliance on agriculture and domestic animals for food. Throughout most or all parts of other continents, none of those things existed at that time; some but not all of them emerged later in parts of the Native Americas and sub-Saharan Africa, but only over the course of the next five millennia; and none of them emerged in Aboriginal Australia. That should already warn us that the roots of western Eurasian dominance in the modern world lie in the preliterate past before 3,000 B.C. (By western Eurasian dominance, I mean the dominance of western Eurasian societies themselves and of the societies that they spawned on other continents.)

Third, a history focused on western Eurasian societies completely bypasses the obvious big question. Why were those societies the ones that became disproportionately powerful and innovative? The usual answers to that question invoke proximate forces, such as the rise of capitalism, mercantilism, scientific inquiry, technology, and nasty germs that killed peoples of other continents when they came into contact with western Eurasians. But why did all those ingredients of conquest arise in western Eurasia, and arise elsewhere only to a lesser degree or not at all?

Thoughts on the work

One of the more important contributions to long-term economic history and is simply mandatory to anyone who purports to engage Big Questions in the area of long-term global history.

Overall however, the reception to Guns, Germs, and Steel by academics has been mixed. While there has been a great deal of praise for the book because of its synthesis of different subjects, many reviewers note that the large scope of the work will inevitably lead to some inaccuracies and oversimplifications.

International Relation scholar Iver B. Neumann (of the London School of Economics and Political Science) brutes that, “while empirical details should, of course, be correct, the primary yardstick for this kind of work cannot be attention to detail.” He concluded by saying that until somebody can come up with a better way of interpreting and adding to Diamond’s material with a view to understanding the same overarching problematique, Diamond’s is the best treatment available of the ecological preconditions for why one part of the world, and not another, came to dominate.

In another review that concluded by recommending the work, historian Tom Tomlinson wrote, “given the magnitude of the task he has set himself, it is inevitable that Diamond uses very broad brush-strokes to fill in his argument.” Emory University historian Tonio Andrade writes that Diamond’s book “may not satisfy professional historians on all counts” but that it “does make a bold and compelling case for the different developments that occurred in the Old World versus the New (he is less convincing in his attempts to separate Africa from Eurasia).”

Anthropologist and geographer James Morris Blaut criticised Guns, Germs, and Steel, among other reasons, for reviving the theory of environmental determinism, and described Diamond as an example of a modern Eurocentric historian. John Brätland, an Austrian school economist of the U.S. Department of the Interior, complained in a Journal of Libertarian Studies article that Guns, Germs, and Steel entirely neglects individual action, concentrating solely on the centralised state; fails to understand how societies form (assessing that societies do not exist or form without a strong government); and ignores various economical institutions, such as monetary exchange that would allow societies to “rationally reckon scarcities and the value of actions required to replace what is depleted through human use.” 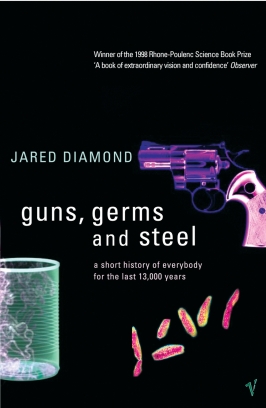