Percy Bysshe Shelley was one of the major English Romantic poets, who is regarded by some as among the finest lyric and philosophical poets in the English language, and one of the most influential. 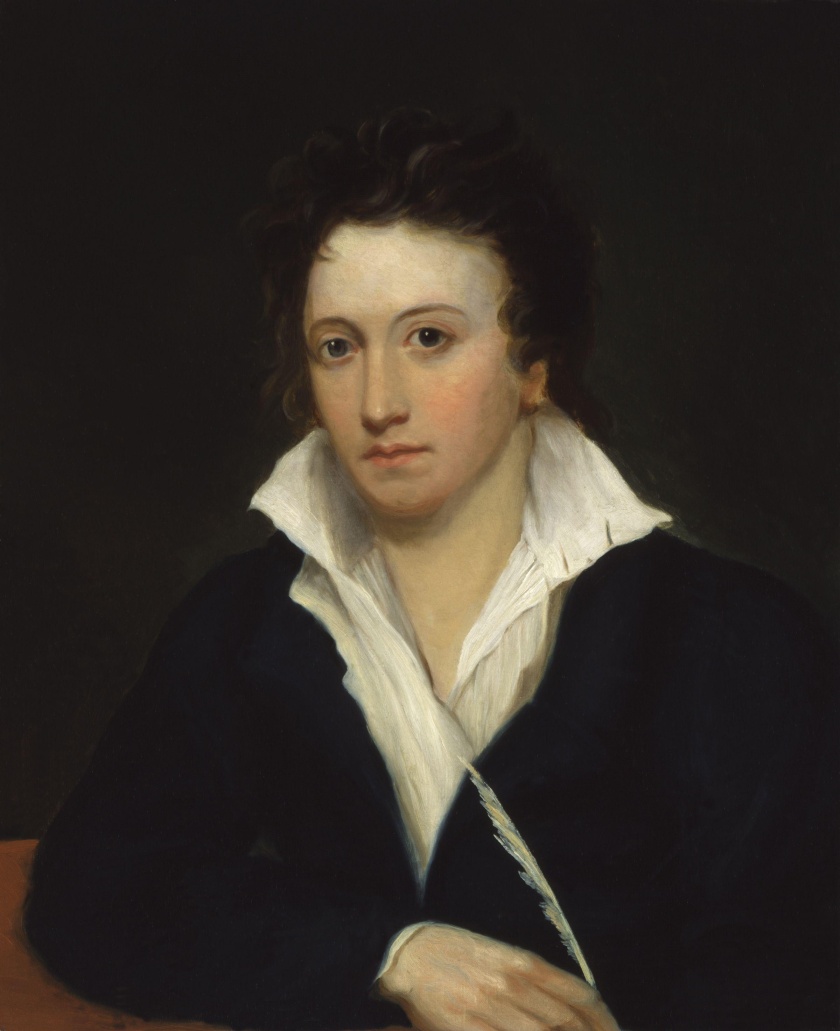 shelley_Alastor
The poem entitled “ALASTOR” may be considered as allegorical of one of the most interesting situations of the human mind. It represents a youth of uncorrupted feelings and adventurous genius led forth by an imagination inflamed and purified through familiarity with all that is excellent and majestic, to the contemplation of the universe. He drinks deep of the fountains of knowledge, and is still insatiate. The magnificence and beauty of the external world sinks profoundly into the frame of his conceptions, and affords to their modifications a variety not to be exhausted. So long as it is possible for his desires to point towards objects thus infinite and unmeasured, he is joyous, and tranquil, and self-possessed. But the period arrives when these objects cease to suffice. His mind is at length suddenly awakened and thirsts for intercourse with an intelligence similar to itself. He images to himself the Being whom he loves. Conversant with speculations of the sublimest and most perfect natures, the vision in which he embodies his own imaginations unites all of wonderful, or wise, or beautiful, which the poet, the philosopher, or the lover could depicture. The intellectual faculties, the imagination, the functions of sense, have their respective requisitions on the sympathy of corresponding powers in other human beings. The Poet is represented as uniting these requisitions, and attaching them to a single image. He seeks in vain for a prototype of his conception. Blasted by his disappointment, he descends to an untimely grave.

In 1811 Shelley anonymously published a pamphlet called “The Necessity of Atheism”,* which was brought to the attention of the university administration, and he was called to appear before the college’s fellows, including the Dean, George Rowley. His refusal, to college authorities, to answer questions regarding whether or not he authored the pamphlet resulted in his expulsion from Oxford on 25 March 1811. Shelley was given the choice to be reinstated after his father intervened, on the condition that he would have to recant his avowed views. His refusal to do so led to a falling-out with his father.

‘Adonaïs’
Shelley wrote this poem in 1821 as an elegy on the death of his friend and fellow Romantic poet, John Keats, who had died in Rome of tuberculosis, aged just 25. The poem is a pastoral elegy in the vein of John Milton’s Lycidas, and uses the nine-line stanza form known as the Spenserian stanza, borrowed from Edmund Spenser’s The Faerie Queene. Just over a year later, Shelley himself would be dead – when he drowned, he had a volume of Keats’s poems with him.

O, wind, if winter comes, can spring be far behind?

Oh, lift me as a wave, a leaf, a cloud! I fall upon the thorns of life! I bleed!

Our sweetest songs are those that tell of saddest thought.

Nothing in the world is single; All things by a law divine In one another’s being mingle:— Why not I with thine?

Poets are the unacknowledged legislators of the world.

Man’s yesterday may never be like his morrow; Nought may endure but Mutability.

Rise like Lions after slumber In unvanquishable number — Shake your chains to earth like dew Which in sleep had fallen on you — Ye are many — they are few.

The great instrument of moral good is the imagination.

Synopsis of “The Necessity of Atheism”
The tract starts with the following rationale of the author’s goals:

As a love of truth is the only motive which actuates the Author of this little tract, he earnestly entreats that those of his readers who may discover any deficiency in his reasoning, or may be in possession of proofs which his mind could never obtain, would offer them, together with their objections to the Public, as briefly, as methodically, as plainly as he has taken the liberty of doing.

Shelley made a number of claims in Necessity, including that one’s beliefs are involuntary, and, therefore, that atheists do not choose to be so and should not be persecuted. Towards the end of the pamphlet he writes: “the mind cannot believe in the existence of a God.”[2] Shelley signed the pamphlet, Thro’ deficiency of proof, AN ATHEIST,[2] which gives an idea of the empiricist nature of Shelley’s beliefs. According to Berman, Shelley also believed himself to have “refuted all the possible types of arguments for God’s existence,”[3] but Shelley himself encouraged readers to offer proofs if they possess them.

Opinion is divided upon the characterisation of Shelley’s beliefs, at the time of the writing of Necessity. At the very beginning of his note on the line “There is no God” in Canto VII of Queen Mab, published just two years later and based on Necessity, Shelley qualifies his definition of atheism:

There Is No God. This negation must be understood solely to affect a creative Deity. The hypothesis of a pervading Spirit co-eternal with the universe remains unshaken.

Shelley scholar Carlos Baker states that “the title of his college pamphlet should have been The Necessity of Agnosticism rather than The Necessity of Atheism,”[5] while historian David Berman argues that Shelley was an atheist, both because he characterised himself as such, and because “he denies the existence of God in both published works and private letters”[3] during the same period.

“The Necessity of Atheism”
[ the bold is mine… ]
A CLOSE examination of the validity of the proofs adduced to support any proposition, has ever been allowed to be the only sure way of attaining truth, upon the advantages of which it is unnecessary to descant; our knowledge of the existence of a Deity is a subject of such importance, that it cannot be too minutely investigated; in consequence of this conviction, we proceed briefly and impartially to examine the proofs which have been adduced. It is necessary first to consider the nature of Belief.

When a proposition is offered to the mind, it perceives the agreement or disagreement of the ideas of which it is composed. A perception of their agreement is termed belief, many obstacles frequently prevent this perception from being immediate, these the mind attempts to remove in order that the perception may be distinct. The mind is active in the investigation, in order to perfect the state of perception which is passive; the investigation being confused with the perception has induced many falsely to imagine that the mind is active in belief, that belief is an act of volition, in consequence of which it may be regulated by the mind; pursuing, continuing this mistake they have attached a degree of criminality to disbelief of which in its nature it is incapable; it is equally so of merit.

The strength of belief like that of every other passion is in proportion to the degrees of excitement.

The degrees of excitement are three.

The senses are the sources of all knowledge to the mind, consequently their evidence claims the strongest assent.

The decision of the mind founded upon our own experience derived from these sources, claims the next degree.

The experience of others which addresses itself to the former one, occupies the lowest degree,–

Consequently no testimony can be admitted which is contrary to reason, reason is founded on the evidence of our senses.

Every proof may be referred to one of these three divisions; we are naturally led to consider what arguments we receive from each of them to convince us of the existence of a Deity.

1st. The evidence of the senses.–If the Deity should appear to us, if he should convince our senses of his existence; this revelation would necessarily command belief;–Those to whom the Deity has thus appeared, have the strongest possible conviction of his existence.

Reason claims the 2nd. place, it is urged that man knows that whatever is, must either have had a beginning or existed from all eternity, he also knows that whatever is not eternal must have had a cause.–Where this is applied to the existence of the universe, it is necessary to prove that it was created, until that is clearly demonstrated, we may reasonably suppose that it has endured from all eternity.–In a case where two propositions are diametrically opposite, the mind believes that which is less incomprehensible, it is easier to suppose that the Universe has existed from all eternity, than to conceive a being capable of creating it; if the mind sinks beneath the weight of one, is it an alleviation to increase the intolerability of the burden?–The other argument which is founded upon a man’s knowledge of his own existence stands thus.—A man knows not only he now is, but that there was a time when he did not exist, consequently there must have been a cause.–But what does this prove? we can only infer from effects causes exactly adequate to those effects;—But there certainly is a generative power which is effected by particular instruments; we cannot prove that it is inherent in these instruments, nor is the contrary hypothesis capable of demonstration; we admit that the generative power is incomprehensible, but to suppose that the same effect is produced by an eternal, omniscient Almighty Being, leaves the cause in the same obscurity, but renders it more incomprehensible.

The 3rd. and last degree of assent is claimed by Testimony—it is required that it should not be contrary to reason.—The testimony that the Deity convinces the senses of men of his existence can only be admitted by us, if our mind considers it less probable that these men should have been deceived, then that the Deity should have appeared to them—our reason can never admit the testimony of men, who not only declare that they were eye- witnesses of miracles but that the Deity was irrational, for he commanded that he should be believed, he proposed the highest rewards for faith, eternal punishments for disbelief—we can only command voluntary actions, belief is not an act of volition, the mind is even passive, from this it is evident that we have not sufficient testimony, or rather that testimony is insufficient to prove the being of a God, we have before shewn that it cannot be deduced from reason,—they who have been convinced by the evidence of the senses, they only can believe it.

From this it is evident that having no proofs from any of the three sources of conviction: the mind cannot believe the existence of a God, it is also evident that as belief is a passion of the mind, no degree of criminality can be attached to disbelief, they only are reprehensible who willingly neglect to remove the false medium thro’ which their mind views the subject.

It is almost unnecessary to observe, that the general knowledge of the deficiency of such proof, cannot be prejudicial to society: Truth has always been found to promote the best interests of mankind.—Every reflecting mind must allow that there is no proof of the existence of a Deity. Q.E.D.