Assumed author of the epic poems, Iliad and Odyssey 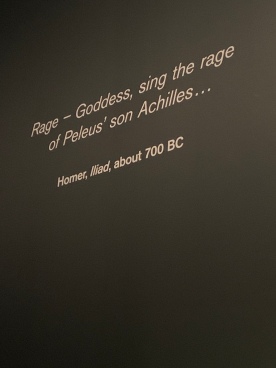 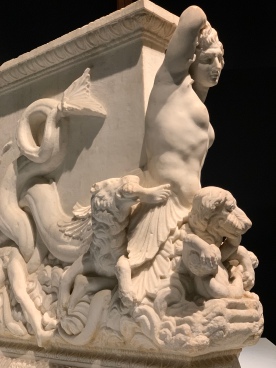 Seven Greek cities claim the honour of being the birthplace of Homer (c. 8th-7th century BC), the poet to whom the composition of the Iliad and Odyssey are attributed. The Iliad is the oldest surviving work of Western literature, but the identity–or even the existence–of Homer himself is a complete mystery, with no reliable biographical information having survived.

There is the heat of Love, the pulsing rush of Longing, the lover’s whisper, irresistible—magic to make the sanest man go mad.

High on Olympus, Zeus and the assembled Greek gods look down on the world of men, to the city of Troy where a bitter and bloody war has dragged into its tenth year, and a quarrel rages between a legendary warrior and his commander. Greek ships decay, men languish, exhausted, and behind the walls of Troy a desperate people await the next turn of fate. This is the Iliad: an ancient story of enduring power; magnetic characters defined by stirring and momentous speeches; a panorama of human lives locked in a heroic struggle beneath a mischievous or indifferent heaven.

Above all, Iliad is a tale of the devastation, waste and pity of war. It is an ancient Greek epic which underpins the whole of western literature.

A timeless evocation of the struggle to retain a sense of honour and virtue amidst the horrors of war.

The Iliad is the greatest literary achievement of Greek civilization. The story centres on the critical events in four days of the tenth and final year of the war between the Greeks and the Trojans. It describes how the quarrel of Agamemnon and Achilleus sets in motion a tragic sequence of events, which leads to Achilleus’ killing of Hektor and determines the ultimate fate of Troy. But Homer’s theme is not simply war or heroism. With compassion and humanity he presents a universal and tragic view of the world, of human life lived under the shadow of suffering and death, set against a vast and largely unpitying divine background. The Iliad is the first of the world’s great tragedies.

Odyssey is Homer’s best-loved poem, recounting Odysseus’ wanderings after the Trojan War. With wit and wile, the ‘man of twists and turns’ meets the challenges of the sea-god Poseidon, and monsters ranging from the many-headed Scylla to the cannibalistic Cyclops Polyphemus – only to return after twenty years to a home besieged by his wife Penelope’s suitors.

Penelope has been waiting for her husband Odysseus to return from Troy for many years. Little does she know that his path back to her has been blocked by astonishing and terrifying trials. Will he overcome the hideous monsters, beautiful witches and treacherous seas that confront him? This rich and beautiful adventure story is one of the most influential works of literature in the world.

Literature’s grandest evocation of life’s journey, at once an ageless human story and an individual test of moral endurance.

The Apotheosis of Homer is a grand 1827 painting by Jean-Auguste-Dominique Ingres, now exhibited at the Louvre in Paris. The symmetrical composition depicts Homer being crowned by a winged figure personifying Victory or the Universe. Forty-four additional figures pay homage to the poet in a kind of classical confession of faith.

Circe (Greek: Κίρκη) is the ancient goddess of magic or sometimes she is cast as a nymph, enchantress or sorceress in Greek mythology. She is a daughter of the god Helios and either the Oceanid nymph Perse or the goddess Hecate. Circe was renowned for her vast knowledge of potions and herbs. Through the use of these and a magic wand, she would, so the myth goes, transform her enemies, or those who offended her, into animals.

The best known of her legends is told in Homer’s Odyssey when Odysseus visits her island of Aeaea on the way back from the Trojan War and she changes most of his crew into swine. He forces her to return them to human shape, lives with her for a year and has sons by her, including Latinus and Telegonus. Her ability to change others into animals is further highlighted by the story of Picus, an Italian king whom she turns into a woodpecker for resisting her advances. Another story makes her fall in love with the sea-god Glaucus, who prefers the nymph Scylla to her. In revenge, Circe poisoned the water where her rival bathed and turned her into a dreadful monster

Purported
Appearing or stated to be true, though not necessarily so; alleged. — “The purported marriage was, it turned out, void.”