❝
I love my one&only as do poets love the poetry that kills them, as do sailors the sea that drowns them.
❞

❝
The classics can console. But not enough . . .
❞

A while back, as per the curriculum’s instructions, I was discovering the works of Toni Morrison. Now a similar set of instructions invites me to investigate the works of Derek Walcott. Like flotsam I’m adrift, listing and teetering, buoyed a bit — only just — by the Gulf stream’s salinity (or should I say in fact the Dead Sea’s? You tell me for, what occurred in the arena and environs of what’s today named Palestine, really underpins all that we call the Western canon of literature). I dwell, I’m sure you’ve ‘deduced’ — you [2nd pl.], the fabled fictitious, as in you aren’t at all there, you; you [2nd sing.], the mercurial one whose mental whereabouts is a mystery to humankind n beast alike — in Arabia Deserta. That is, the region above Arabia Felix — from desert to orange grove, yeah right, no, think Queen of Sheba, the heat of a relentless afternoon in Sana’a and the incessant burn of insatiable internal desire; a constant unflinching flame — and, below Arabia Petraea — that I’ll expand and add to Palestine: ‘The Hebrew Bible’, Mesopotamia, Gilgamesh and, to hell with time and geographical rigidness, Homer’s epics too.  [1]

❝
If I should die, think only this of me…
She’s gone, and all our plans
are useless indeed
And say with conviction:
“Dulce Et Decorum Est”
But fa sure, consider this rejoinder to Horace:
is it? Is it really worth it…
❞

I see it and read it in “Unspeakable, unspoken” and I see it and read it in “Omeros.” Time heals yeah? And believe you me I listened to 1619 — I even put the audio files here for posterity — but you see, we can lionise Ancient Rome and Ancient Greece because what happened there is past and what remains are beautiful things like democracy and underfloor heating and fa sure, fantastic fiction in both poetic and prose from. So yes I see colonialism and slavery as they rightly should be seen, but — dear reader — has not humankind always been unkind to fellow humankind? Us and them was not manufactured by the likes of Samuel Huntington and Francis Fukuyama. No! It was there in Sumeria, it was there lurking in the orchard, it is, I brazenly say, within the fabric of humankind, part of the human condition.

Here are some pages of potential interest. I hasten to emphasise and underscore the adjective ‘potential’:

The discontent that lies in the human condition is not satisfied simply by material things.

I’d rather have just one person who reads and feels my work deeply than hundreds of thousands who read it but don’t really care about.

In terms of public interest and the greater good, a duet of works by Walcott, for study purposes only:

[1]   To try and trace the course or deduce the derivation of something is not always a scientific endevour. No! It can be far more speculative and subjective in certain circumstances. It was a long time in coming and the comeuppance was and is harsh. See:
“Empire of Deceit: entrapped in honey, money or, plain old power?”

Fatherly and intent, was off in a deep green valley
Surveying and reviewing souls consigned there,
Those due to pass to the light of the upper world.
It so happened he was just then taking note

Of his whole posterity, the destinies and doings,
Traits and qualities of descendants dear to him,
But seeing Aeneas come wading through the grass
Towards him, he reached his two hands out
In eager joy, his eyes filled up with tears
And he gave a cry: “At last! Are you here at last?
I always trusted that your sense of right
Would prevail and keep you going to the end.
And am I now allowed to see your face,
My son, and hear you talk, and talk to you myself?

This is what I imagined and looked forward to
As I counted the days; and my trust was not misplaced.
To think of the lands and the outlying seas
You have crossed, my son, to receive this welcome.
And after such dangers! I was afraid that Africa
Might be your undoing.” But Aeneas replied:
“Often and often, father, you would appear to me,
Your sad shade would appear, and that kept me going
To this end. My ships are anchored in the Tuscan sea.
Let me take your hand, my father, O let me, and do not

Hold back from my embrace.” And as he spoke he wept.
Three times he tried to reach arms round that neck.
Three times the form, reached for in vain, escaped
Like a breeze between his hands, a dream on wings.
❞
— Virgil, “The Aeneid” (Book VI). Translated from the original Latin by Seamus Heaney (1939-2013); published by The New Yorker in 2016.

^ I have now read this a dozen or more times and only now, is a meaning emerging. I’ve no context (((I could dig but I shan’t — i.e., I could read up on Virgil’s “The Aeneid” and/or look into a good half-millennia’s worth of essays and tomes that draw out and align his Roman founding myth with that of Ancient Greece’s — I did though happen across a few painted works of art on the subject and these are depicted below))) but what’s beginning to form in my mind is a passage depicting a dream, double vision, wanting a heartfelt wish to materialise, wanting beyond want a thing that is neigh on impossible to get or to have. More devastatingly so because, even if it were to be realised, the ramifications of it — I speak here more personally now — would soon act to indelibly taint and mar the realised dream. Back to the poem, some things can never be sated; sons and fathers reaching in vein to bridge breaches. Must there be fault-lines along this cline? I know not, if ever I had a connection, it has long since gone (I don’t feel beholden, I don’t feel denigrated). As my woman said to me, no response stings more than apathy. To elicit consternation and ridicule is better than a snoring Lecturer on student presentation day or, a swipe left without a second glance or a moment’s hesitation (I don’t recall if rejection’s a swipe to the left or to the right but, you get the point don’t ‘you,’ oh fic-fuckin-ticious you). Mums ‘n’ daughters; Freud (Sigmund) ‘n’ Freud (Lucian) & the Oedipal complex and, the impassioned lyrics “The killer awoke before dawn / He put his boots on / He took a face from the ancient gallery / And he walked on down the hall // He went into the room where his sister lived / And then he paid a visit to his brother / And then he walked on down the hall / And he came to a door / And he looked inside / Father? / Yes son / I want to kill you / Mother, I want to… /// was it ‘fuck,’ or just ‘kill’ too? Etc. etc. I’m sic n tired of relying on context for understanding, for my long-run weakness to blindly adhere to the interpretations of others. Literature is art, art is in the eye of the beholder, it is for me — in my isolation wing of solitary confinement — to decide what I see and what I feel when I happen across a piece of poetry.

There is the heat of Love, the pulsing rush of Longing, the lover’s whisper, irresistible—magic to make the sanest man go mad.

All but the heel

The myth of the Tojan War dates back over 3,000 years to the early days of ancient Greece. The abduction of one of their queens, Helen, prompted the Greeks to wage a ten-year campaign against Troy. Many atrocities are committed. There are heroes and victims on both sides. The Greeks win, annihilating the great city. The story addresses universal themes of heroism and violence, love and loss, hope and despair. It is a powerful archetype for all wars. Its characters — fierce Achilles, dutiful Hector, beautiful Helen — are as alive for is today as they were for the ancient Greeks.

Homer’s Iliad (1st) concerns itself with “wrath” — the wrath of a man at arms. Homer’s Odyssey (2nd) is all about someone trying to get home from the Trojan War. Vergil’s Aeneid (3rd) is half Odyssey and half Iliad with some uniquely Roman elements added to boot.

Iliad shows the continual breakdown of human efforts to end violence — again and again peace is nigh and again and again something thwarts it. Then the poem turns blood red (or “blood black,” since blood is always “black” with Homer). Yet its epic similes imagine natural and domestic scenes. A rain of spears is likened to falling snow. Odyssey is an adventure story and a story of nostalgia and homecoming, but at its heart are the norms and decorums of civilization. The first sign we get that the Cyclops is uncivilized is that he asks Odysseus his name before showing his guests proper hospitality (feeding them, washing their feet, and so forth). The Odyssey’s simile-world is often the inverse of the Iliad’s: domestic matters are likened to wartime occurrences and phenomena.

Aeneid has what we might describe as an imperial theme: the difficulty of founding an empire, the cost of empire, the horrors of violence and death, the paradoxical means by which these can arrive at a kind of peace: it is, in other words, a poem in an uneasy relationship to Augustan world (relating to or denoting Latin literature of the reign of Roman Emperor Augustus, including the works of Horace and Ovid alongside that of Vigil) for which it provides an aetiology (the investigation or attribution of the cause or reason for something, often expressed in terms of historical or mythical explanation). It makes us ask over and over: what exactly is civilization and, is civilization worth its weight in blood?

too long she has suffered the pain of love, hour by hour nursing the wound with her lifeblood, consumed by the fire buried in her heart; his looks, his words, they pierce her heart and cling

— no peace, no rest for her body, love will give her none.

So, we have three key works:
1. — Iliad
2. — Odyssey
3. — Aeneid
All of which have been hugely influential on the literature and art that has been produced over the subsequent two millennia. 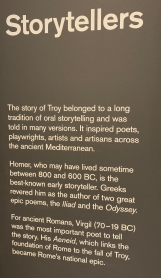 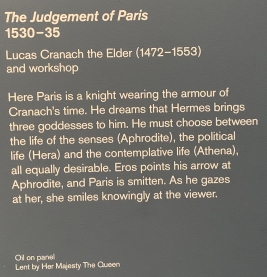 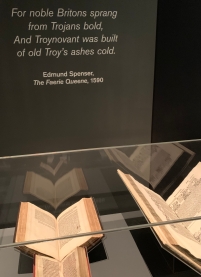 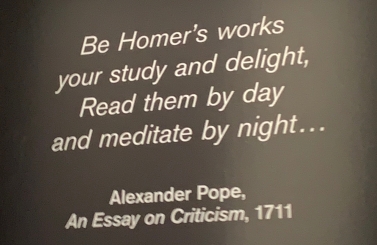