Lucian Freud, (1922–2011) was a British painter who is now considered to be one of the foremost 20th c. portraitists. By the 1950s his often stark and alienated paintings tended towards realism. His paintings, that span more that a ½ century, are mostly of friends and acquaintances. Many are noted for their psychological penetration and often discomforting examination of the relationship between himself and the one/s being painted (you’ll see what I’m on about below).

Lucian Freud’s family moved to England in 1933 to escape the rise of Nazism. He is the grandson of Sigmund Freud. Freud got his first name “Lucian” from his mother in memory of the ancient writer Lucian of Samosata.

Lucian of Samosata (c. 125–181) was an Assyrian satirist and rhetorician who is best known for his characteristic tongue-in-cheek style, with which he frequently ridiculed superstition, religious practices, and belief in the paranormal. Although his native language was probably Syriac he wrote in Ancient Greek. Historians tell us that Lucian’s works were very popular in antiquity, and more than eighty writings attributed to him have survived to the present day, a considerably higher quantity than for most other classical writers. His most famous work is “A True Story,” which ridicules authors who tell far-fetched tales. This work is considered by some as the earliest known work of science fiction. His influence on the Western canon is substantial and includes e.g., Thomas More’s “Utopia,” William Shakespeare’s “Timon of Athens,” Jonathan Swift’s “Gulliver’s Travels” and a number of paintings by Sandro Botticelli (c.1445–1510).

In 1952, Freud eloped — run off — with Guinness heiress and writer Lady Caroline Blackwood to Paris, where they married in 1953 and six years later got divorced.

According to one U.K. daily (namely The Daily Express with a front page spread headlined: “Lucian Freud the lothario”) Freud is said to have fathered as many as forty children. That may well be something of an exaggeration for, according to Wikipedia, “only fourteen children are officially identified,” 12 of which whose mothers are described as being — rather harshly I feel — “mistresses.” 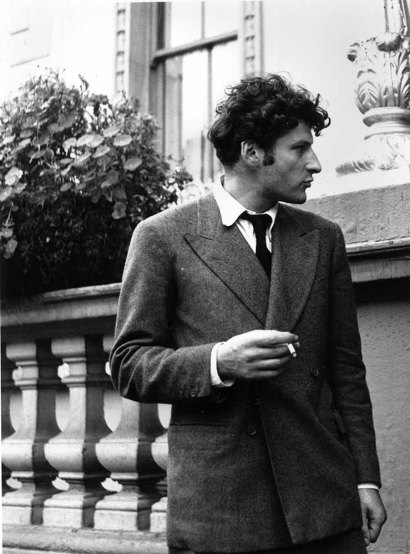 “The painter must give a completely free rein to any feeling or sensations he may have and reject nothing to which he is naturally drawn.” — Lucian Freud (1922–2011)

“The painter must give a completely free rein to any feeling or sensations he may have and reject nothing to which he is naturally drawn.” — Lucian Freud (1922–2011)

It is said that towards the end he said: “What do I ask of a painting? I ask it to astonish, convince, disturb [and] seduce.”

One of L. F.’s children is Esther Freud. She travelled extensively with her mother — Bernardine Coverley — and sister in her younger years and this no doubt contributed to her 1992 novel Hideous Kinky.

Hideous Kinky is an autobiographical novel by Esther Freud, daughter of British painter Lucian Freud and Bernardine Coverley and great-granddaughter of Sigmund Freud. It depicts the author’s unconventional childhood in Morocco with her mother and her elder sister, Bella.

Esther Freud at the 2008 The Palestine Festival of Literature with William Dalrymple to the left and Dr. Hanan Ashrawi to the right. 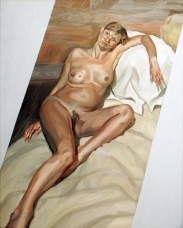 While pregnant, Kate Moss posed for Lucian Freud. Her portrait was purchased by an anonymous buyer for £3.9 million at auction in 2005