On McEwan’s ‘On Chesil Beach’

I’ll say this: don’t watch it, read it. It will not take you too long, the book is very readable — there are no long detours and, the succinct character background building and scene setting (especially of the coastline from the vantage of the bridal suite’s balcony) add volumes to the pent up (and long repressed) desires that constitute the heart and soul of Chesil Beach. You kind of know something bloody bad’ll happen from the blurb and from the opening lines and yeah, there’s a ‘tragedy’ of sorts…

I use single quotation marks around the word tragedy because I’m not saying it is one; strictly speaking it wasn’t one at all. Typically, single quotation marks are used to mark a quote within a quote or a direct quote in a newspaper story’s headline. However, single ( ‘.’ ) or double ( “.” ) ((علامات تنصيص‎)) can be used to imply consternation, disagreement or emphasis… it’s all in the context: ‘all’ in the bloody ducking con–text m8.

Reviewer of books, Jonathan Yardley — who won a Pulitzer Prize for his art — placed On Chesil Beach on his top ten for 2007; the year Ian McEwan published this book. He (Yardley) said that even when he (McEwan) is in “minor mode … he is nothing short of amazing.” Minor mode because of the novel’s length. It is, according to the author, more of a novella than a novel. I felt that the paragraphs given to Edward’s mother’s erratic behavior and unstated mental illness were very telling, he’d endured a lot and suppressed a lot; there was little he wouldn’t have done for Florence who’s prudishness most surely have had a deeper, darker — unwritten about — founding stroy.

Daniel Zalewski (The New Yorker) states that, “all novelists are scholars of human behavior, but Ian McEwan pursues the matter with more scientific rigor than the job strictly requires.” He went on to point out that after discussing his many duplicitous characters — such as Briony Tallis, the precocious adolescent of his 2001 novel, Atonement, who one reviewer claims: “ruins two lives when she makes a false accusation of rape” — McEwan pointed to a “study in cognitive psychology” suggesting that “the best way to deceive someone is first to deceive yourself.” After all one is more convincing when they are being sincere (irrespective of whether they are delusional or not). The accidental slip — the penned words, ‘I want to kiss your see you en tea’ were not supposed to be read — elementally underscores the potential portent of the flap of the butterfly’s wing analogy to chaos theory. 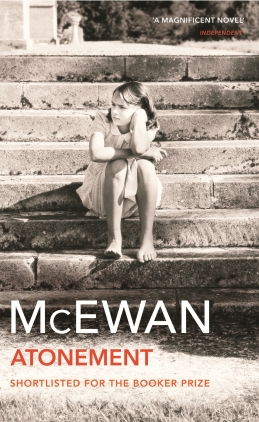 McEwan, I. (2001). Atonement. London: Jonathan Cape.
I’ll point you now to this post for a reason I’ll leave unstated:

& this one too because I just somehow don’t rest easy with the false claim of rape ^ because yeah, it happens, but, so too — and far more frequently I submit to you — do falsely dismissed cases of actual rape:

↘
“Lust and Lambast”
A hand left poignantly unshaken; a republican party, quite unstirred.