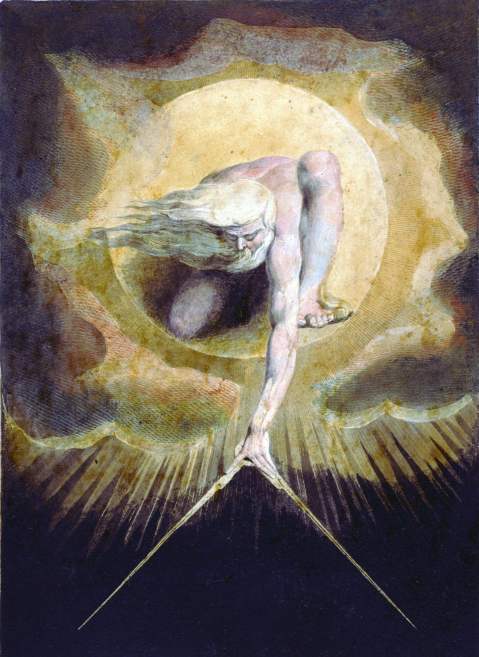 William Blake’s The Ancient of Days 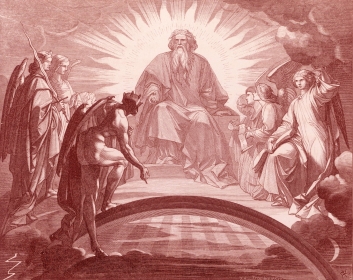 Mephisto in front of God and the three archangels, drawn by August von Kreling in Goethe’s Faust.

Michelangelo’s God @ the Sistine Chapel at the Vatican
You know, when we English Lit. students dream of being writers, we somehow think we’ve something to add to the canon, in some ways, we all have, but the more I dig, the more I scan Project Gutenberg (e t c .),* the more I realise that countless thousands who’ve lived (read, thought, written) and died before I was pushed out into this world, have probably (no ‘definitely’) thought what I think (far more deeply), have set out to articulate what I abstractedly and dreamily plan to one day articulate (& they’ve actually done so in concrete codex form). I feel I’m in the dead calm at the very centre of a tropical vortex –((( it’s wondered off course, North, for I reside in The Pearl; a multi-story complex built beside an artificial lagoon on a peninsula that juts out into the tepid seawater of the Arabian Gulf. Languid in largesse the panoramic view is beset by an unrelenting, near blinding, shimmer — the sun bleaches and becalms vigour. Maritime scenes are confused by midday mirages, mercury in colour — oil money stymies gainful endevour. )))– for I’ve scedules and to-do-lists, ambitions and passions, but I’m laying here listless. And while all is swirling tumultuously around me I’m strapped down by paralysis, I want to write, I want to let it bleed, I so dearly want “writing to be my therapy” as we’d say to each other it would be. We’d say such things in abstract ways mulling over a potential future parting of ways that neither you or I, back then, could seriously contemplate as a possible eventuality. // The whirlpool’s walls tower up indeterminately, they seem to be leaning in, this could be an optical illusion, but more likely it is nature’s way via the force of gravity; you sea, once I had it all; now I’ve nothing at all. \\ They’d say things like “he’s a man of letters” — I’ve read it said — and I’ll update that to be s/he, but yes, in the days before swiping right and switching swiftly between screens, writers on their typewriters (or with paper and gravity aloof pencils), would certainly have been better readers and thus better writers. I was born less than half a dozen years before the millennium, iPads were out before I was into my teenage years. I can’t compare the past to now from knowledge of both, but I’m confident that reading (in say the Victorian/Edwardian way/day) is increasingly a rarity today. On my bloody fucking university campus most key text books are only supplied to us as eBooks (I ain’t even lying . . . I will walk and I will talk). 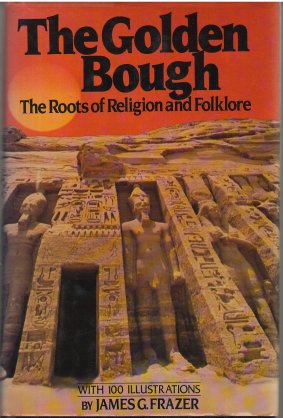 Here’s an extract — the Preface to a follow-on work The Aftermath (1936) the language, I think, is sublime:

When I first put pen to paper to write The Golden Rough I had no conception of the magnitude of the voyage on which I was embarking ; I thought only to explain a single rule of an ancient Italian priesthood. But insensibly I was led on, step by step, into surveying, as from some specular height, some Pisgah of the mind, a great part of the human race ; I was beguiled, as by some subtle enchanter, into inditing what I cannot but regard as a dark, a tragic chronicle of human error and folly, of fruitless endeavour, wasted time, and blighted hopes. At the best the chronicle may serve as a warning, as a sort of Ariadne’s thread, to help the forlorn wayfarer to shun some of the snares and pitfalls into which his fellows have fallen before him in the labyrinth of life. Such as it is, with all its shortcomings, I now submit The Golden Bough in its completed form to the judgment of my contemporaries, and perhaps of posterity.

Here is another one:

The advance of knowledge is an infinite progression towards a goal that for ever recedes. We need not murmur at the endless pursuit:

Great things will come of that pursuit, though we may not enjoy them. Brighter stars will rise on some voyager of the future—some great Ulysses of the realms of thought—than shine on us. The dreams of magic may one day be the waking realities of science. But a dark shadow lies athwart the far end of this fair prospect. For however vast the increase of knowledge and of power which the future may have in store for man, he can scarcely hope to stay the sweep of those great forces which seem to be making silently but relentlessly for the destruction of all this starry universe in which our earth swims as a speck or mote. In the ages to come man may be able to predict, perhaps even to control, the wayward courses of the winds and clouds, but hardly will his puny hands have strength to speed afresh our slackening planet in its orbit or rekindle the dying fire of the sun. Yet the philosopher who trembles at the idea of such distant catastrophes may console himself by reflecting that these gloomy apprehensions, like the earth and the sun themselves, are only parts of that unsubstantial world which thought has conjured up out of the void, and that the phantoms which the subtle enchantress has evoked to-day she may ban to-morrow. They too, like so much that to common eyes seems solid, may melt into air, into thin air.

* Project Gutenberg is the world’s oldest digital library. It places books into the public domain — most are older works that are thus out of copyright. This altruistic endevour began with the efforts of American writer Michael S. Hart in 1971. See for example: 📙 The Golden Bough. A similar project is called The Internet Archive. It provides free access to researchers and the general public. It’s mission is none other than to provide universal access to all knowledge thus far accumulated by human kind. See for example: 📙 Aftermath, a Supplement to the Golden Bough

** “You were not made to live as brutes / But to follow virtue and knowledge.”
— From Divine Comedy by Dante Alighieri

The Love that moves the sun and the other stars.