JUST WAR THEORY
Just war theory (Latin: jus bellum justum) is a philosophy (or ‘doctrine’) with a purpose to ensure war is morally justifiable through a series of criteria, all of which must be met for a war to be considered just. The criteria are split into two groups: “right to go to war” (jus ad bellum) and “right conduct in war” (jus in bello). The first concerns the morality of going to war, and the second the moral conduct within war. Just war theory postulates that war, while terrible, is not always the worst option.

ABSURDISM
Absurdism shares some concepts, and a common theoretical template, with existentialism and nihilism. It has its origins in the work of the 19th-century Danish philosopher Søren Kierkegaard. As a philosophy, absurdism explores the fundamental nature of the absurd — the conflict between the human tendency to seek inherent value and meaning in life, and the human inability to find any in a purposeless, meaningless or chaotic and irrational universe — and how individuals, once becoming conscious of the absurd, should respond to it. Albert Camus stated that individuals should embrace the absurd condition of human existence.

WESTERN PHILOSOPHY
Western philosophy refers to the philosophical thought and work of the Western world beginning with Greek philosophy of the pre-Socratics such as Thales (c. 624 – c. 546 BC) and Pythagoras (c. 570 – c. 495 BC). Dear reader, as I’ve said many a time. the word philosophy itself originated from the Ancient Greek philosophía (φιλοσοφία), literally, “the love of wisdom” (φιλεῖν phileîn, “to love” and σοφία sophía, “wisdom”).

AESTHETICS
Aesthetics is a branch of philosophy that deals with the nature of beauty and taste, as well as the philosophy of art. It considers subjective values — at times referred to as judgments of sentiment and taste.

HEDONISM
Hedonism is a school of thought that argues pleasure and suffering are the only components of well-being. Ethical hedonism contends that what we should do depends exclusively on what affects the well-being individuals have. Ethical hedonists would defend either increasing pleasure and reducing suffering for all beings capable of experiencing them, or just reducing suffering in the case of negative consequentialism. Hedonism derives from the Greek word for “delight.”

EPICUREANISM
Epicureanism is a system of philosophy based upon the teachings of the ancient Greek philosopher Epicurus. It sees the greatest good to be seeking modest, sustainable “pleasure” in the form of a state of tranquility and freedom from fear (ataraxia) and absence of bodily pain (aponia). Although Epicureanism is a form of hedonism insofar as it declares pleasure to be its sole intrinsic goal, its advocacy of a simple life, make it rather distinct from “hedonism” ^ see up dear reader.

RENAISSANCE HUMANISM
Renaissance humanism was a response to what was subsequently labelled the “narrow pedantry” associated with medieval scholasticism. Let’s be clear, it was — wittingly or otherwise — the questioning of why one should put up with a life constrained and controlled by theocratic dogma. In essence is was was a revival in the study of classical antiquity, at first in Italy and then spreading across Western Europe in the 14th, 15th, and 16th centuries. 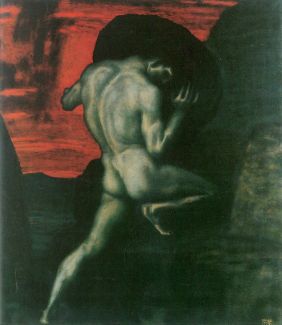 In Greek mythology Sisyphus (Ancient Greek: Σίσυφος) was the king of Ephyra (now known as Corinth). He was punished for his self-aggrandising craftiness and deceitfulness. His punishment wasbeing forced to roll a huge boulder up a hill only for it to roll down when it nears the top; he was made to repeat this action for eternity. Through the classical influence on modern culture, tasks that are both laborious and futile are therefore described as being “Sisyphean.”

Vitruvian Man is Leonardo da Vinci’s own reflection on human proportion and architecture, made clear through words and image. Its purpose is to bring together ideas about art, architecture, human anatomy and symmetry in one distinct and commanding image.