Why should I blame her that she filled my days
With misery, or that she would of late
Have taught to ignorant men most violent ways,
Or hurled the little streets upon the great,
Had they but courage equal to desire?
What could have made her peaceful with a mind
That nobleness made simple as a fire,
With beauty like a tightened bow, a kind
That is not natural in an age like this
Being high and solitary and most stern?
Why, what could she have done, being what she is?
Was there another Troy for her to burn?

This twelve-line poem is addressed to Maud Gonne, who, to Yeats’s great distress, married John MacBride in 1903 (she’d rejected a number of Yeats’s marriage proposals). After Yeats received Maud’s final emphatic and shattering rejection, he wrote “No second Troy.” It is in no small part a poem of unrequited love and it articulates the moment in a tortured love affair when the unrequited lover, at their wits’ end, opens up emotionally — and sends a ‘flamer’ — in a spasm of candid and brutal honesty.

However, it doesn’t only focus on love’s destructiveness on a personal level, it considers this at the level of the state (Irish) and the mythological level too. We can say it is a truism that love and politics when mixed, shaken and stirred, will be an irresistible combination. So, alongside this poem’s clear references to Helen and Paris, think too of the enduring nature of troubled love stories such as Antony and Cleopatra and Romeo and Juliet. So here, while Yeats clearly criticises Maude’s political strategies (but not her goals) he seems to do so in a way to emphasis the larger point about being debilitated by love and the destructive power of beauty. The tightened bow referenced in the poem suggests an inherent tension in heroic beauty that necessarily results in destructiveness.

I view the switch from personal to political as Yeats somehow giving in, conceding defeat, he’s not prepared to destroy Maude’s marriage to MacBride. He doesn’t, metaphorically speaking, raise another Troy to the ground. Instead, he throws in the towel, he controls his passions and consoles himself by demeaning her political strategies as being rather naïve and exploitative of the uneducated common man. As an afterthought, I’d like to say I’d do the same but I fear that an inner fire would burn so searingly that my honed placidity and pacificity would soon shed and, my abyss-borne nihilistic self, with fire & fury, would hunt down and crush completely any sudden suitor for my version of Maude. 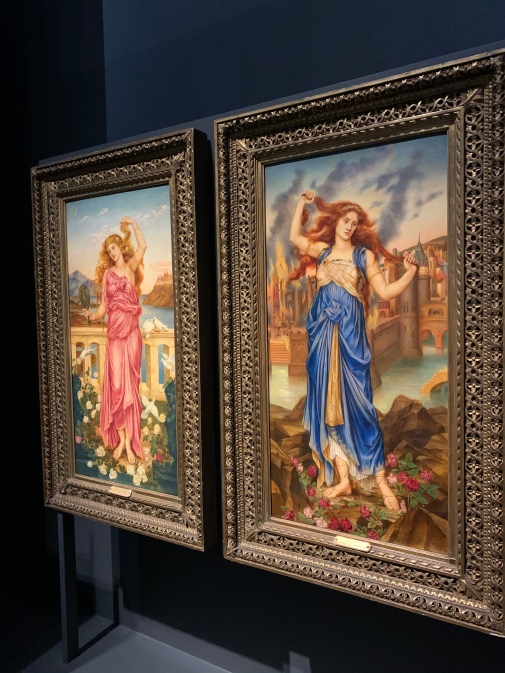 Imagining Helen Popularly mythologised as the world’s most beautiful women

Helen of Troy By Evelyn De Morgan (1898) Helen admiringly displays a lock of her hair, as she gazes into a mirror decorated with the nude Aphrodite.

Was this the face that launch’d a thousand ships
And burnt the topless towers of Ilium?
Sweet Helen, make me immortal with a kiss.

The mythic Helen of Troy, who, 2,500 years ago, set off a war that “launched a thousand ships,” need not be real, but the obsession with female beauty as blessing and curse surely is.* However, we must ask ourselves, was Helen a victim of her beauty or a free agent in full command of her power? As a stand-in for female beauty and sexual power, the myth of Helen and the ancient texts written about the Trojan War — Iliad and Odyssey by Homer and Aeneid by Virgil — are suggestive of male attitudes on control of women and what constitutes heroism.

Charnel house
A building or vault in which corpses or bones are piled; a place associated with violent death.

Flamer
[informal]
A person who directs a vitriolic or abusive message at someone on the Internet or via email. — “Dr Bun sent a flamer to his peers and the email went viral; he lives to regret it every day.”

Misogynistic
To be strongly prejudiced against women. — “In most parts of the world there are deeply ingrained misogynistic attitudes.”

Trope
[1] A figurative or metaphorical use of a word or expression.
[2] A significant or recurrent theme; a motif.
— A literary trope is the use of figurative language, via word, phrase or an image, for artistic effect such as using a figure of speech. The word trope has also come to be used for describing commonly recurring literary and rhetorical devices, motifs or clichés in creative works. The phrase, ‘Stop and smell the roses,’ and the meaning we take from it, is an example of a trope. Derived from the Greek word tropos, which means, ‘turn, direction, way,’ tropes are figures of speech that move the meaning of the text from literal to figurative.

* Readers beware! If we blame Helen for the Trojan War, what does it say about us? I am pasting here the opening paragraphs of a 2014 eye-opening article by Emilie Wilson published in The New Republic. The article is a review of Blondell’s 2013 book, Helen of Troy: Beauty, Myth, Devastation

Émile Zola’s gripping novel Nana (1880) evokes the rise, fall, and early death of a sexy blonde teenager, a celebrity actress and prostitute, who takes all of Paris by storm. She destroys every man who crosses her path before herself dying a dismal death of smallpox, portending the fall of the Second Empire. The novel is part of Zola’s series on urban industrialisation and its threat to traditional family life. Nana, although theoretically human, is a destructive and powerful machine, the engine of the new civilization as well as the motor of Zola’s novelistic plot. Her sexual allure, figured as an irresistible scent, is in the end transformed into, or revealed as, the seeping putrefaction of the charnel house. This is one of the most powerful modern versions of a far more widespread misogynistic trope. Heterosexual male desire for an exceptionally attractive woman tends to be projected onto the woman herself, who is then presented as particularly lustful. Since male desire can be experienced as mysterious, bewildering, and overwhelming, the woman herself must be destructive and deceptive, perhaps possessed of magical witch-like powers.

In ancient Greek mythology, one of the female characters who fits this general model is Pandora, the female sent by Zeus to punish humans for Prometheus’s theft of fire and to end the Golden Age, when she opens the jar of death, pain, and other evils upon the world. This is a relatively straightforward presentation of the beautiful woman as a mechanism for disaster—a mere instrument of divine vengeance. But Hesiod adds that Pandora herself had agency, “strength,” a “mind,” and a “voice,” allowing her to “devise” evils for humanity, when she made the fateful choice to open the jar—an action that, as Ruby Blondell rightly notes in, Helen of Troy: Beauty, Myth, Devastation, has obvious sexual overtones. The problem with Pandora, as with all beautiful women in a patriarchal society, is that she is “more than a statue. And there’s the rub.” The urge to objectify a desirable woman is undermined by the acknowledgment that she might be human; at the same time, her capacity for agency and choice only reinforces her desirability (and makes her seem all the more dangerous).

I provide the full article here: The Shaming Helen of Troy