In a sentence: “In the era of to Brexit or not, British politics is all skulduggery!”

Etymology etc.: interestingly the term has no direct connection to either skulls or digging. The word appears to originate in Britain during the 18th c. where sculduddery meant ‘indecency’ or ‘breach of chastity,’ defined at the time in legal terms as: “fornication or adultery.” Today the word means ‘underhanded dealings,’ ‘trickery’ or ‘clandestine machinations’ and is most often associated with cloak-and-dagger intelligence agencies such as the UK’s MI6*, it was famously used by The Times in 1980, “Watergate was such a sensational piece of skulduggery.”** 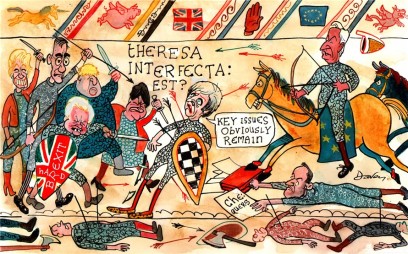 * MI6
In the UK, MI5 deals with security threats within Great Britain, and MI6 combat overseas threats to Britain and/or British overseas interests (MI = Military Intelligence). For the USA, there’s the FBI for security threats within America and the CIA for threats to American and/or American overseas interests (FBI = Federal Bureau of Investigation; CIA = Central Intelligence Agency).

** Watergate
The Watergate scandal was a major American political scandal in the 1970s. It resulted from a robbery at the Democratic National Committee’s headquarters (the “Watergate” office complex in Washington) and Republican President Richard Nixon’s subsequent attempt to cover up his administration’s involvement in the robbery.